Very pleased and ready for a fight!

I am very pleased. Why?
I mentioned in my last blog that our handsome brown stud male Cambridge Columbus, or Clump, as he is affectionately known here in Patouland, was going on his very first mobile mating last weekend. It wasn't far, only 5 minutes up the road to Tisbury Alpacas where the lovely Connie waited impatiently.
Connie is the mother of Patou Polly, a lovely medium fawn cria (sire ATA Cambridge Centurion) born a couple of weeks ago from our 'rent a womb' scheme. Connie is a lovely medium brown and Columbus just seemed right for her. 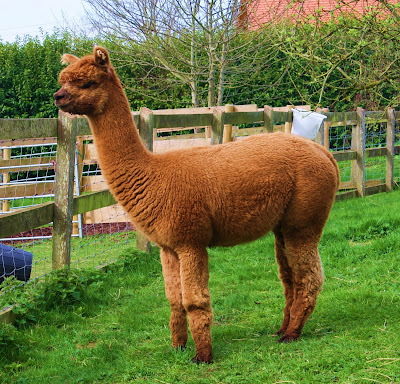 So anyway off we went, me with positive thoughts coursing through my veins and Clump with ..................well lets just say I was hoping he was going to do what he was supposed to do.
On arrival I was met by our good friend Liz who had Connie all penned up ready. I led Clump into the pen and stepped back. He sniffed Connie under the tail, burbled a tiny little orgle that I could only just hear and Connie, bless her, hit the deck with a resounding thud!
Clump then rolled up his sleeves, took a large swig of malt and ...................... well he did what he was supposed to do! Thirty minutes later he looked at me as if to say 'Have you got the ciggies?' and it was all over. Fantastic! Our boy has finally got the hang of this mating malarkey!
So why am I read for a fight?
Well I have just received the latest South West Alpaca Group (SWAG) newsletter. I have an article published in it this quarter which is nice, all about positive thinking and getting off your backside to make things happen, it was published here first (naturally). I hope it helps someone somewhere.
What has fired me up was an article about our (SWAG) Spring show next year. Apparently the 'proposal' is that there will be two rings being judged, one for small breeders (number of alpacas to be decided) and one for the big breeders (bless them, a ring all to themselves). Then the winners will be judged again against each other or something. Sorry but by then I was talking to Sue and she was as incensed as me and we said almost in unison "Well stuff them we won't go".
And that people is how we feel. We just won't go. We'll go for a nice pub lunch instead.
If there are to be two rings, in effect one qualifying ring for the poor little small breeders, the organisers can stuff it. We just will not go. That will not make any difference to the show of course which will still go ahead, and I hope it is well attended and I hope people enjoy themselves. It is about principle. Sue came up with two words whilst we were discussing the article which I wrote down immediately; pompous and defeatist.
If we can't compete on a level playing field (I know I have bashed on about this before but it is worth banging on about!) then there is no point competing. Having a two-tiered judging system is wrong. It is defeatist, it is pompous, it is whingey. It is just about what sums up the way this country is heading.....it is pathetic! It is time for someone to stop pandering to the bloody whingers and whiners and just get on with things. I understand that this has probably been brought about because some small breeder somewhere has said 'It's not fair, we never win anything', well sorry sunshine you just have to keep trying. It's not easy to win rosettes, that's what makes winning them so special! If you and your kind have their way we will end up giving rosettes to everyone so that we have no losers, everyone is a winner! They tried that in the schools system recently and look where that got us, a nation of children with no competitive instinct!
COME ON PEOPLE LET'S RISE UP AND FIGHT FOR COMPETITION!!!!!!!!!!!!
This has been a Mark Steele production for 'Lets make Britain great again'
Posted by Patou Alpacas at 18:12

Firstly - well done Columbus - I had been routing for you!

Secondly - here here - I don't want to be in a ring only competing with small breeders (as you may have guessed from my paragraph in the mag) so if that is what will be happening I can't see Amiryck attending either.

No, we at Coire would not grace the show with our mighty (small) herd either, if we lived there, which we don't, but you know what I mean...

Quite agree! When we start competing we want to show along with everyone else and not be second class!

It's great when the boys do their stuff isn't it.

As for the show I wouldn't be there either, stupid idea.

Who comes up with these hare-brained schemes I wonder? Vote with your feet "small breeders of Britain"!!

Oh and why is Amiryck indulging in some power assisted woodwork vis a vis yer man Clump??!

During our first few months in the industry we felt the same as your "we never win anything against the big boys" people. Competition is tough here in South Australia, even the smallest country show still brings in the big names with some of the best animals in the world. And yes, for those first months we did want to compete against our peers, rather than the big hitters. But, we soon grew out of it. What's the point of winning a ribbon in division two? Well, if I was a cynical person, I'd suggest that it's so that I could show photos on the advertising of animals draped in blue ribbons that they actually won against second rate competition... But I'm not cynical.

Nothing wrong with two divisions in principle. But, make it clear that that's what it is, use ribbons with horizontal banding to make it obvious where they came from and make entry to 'division two' voluntary and exclusive (no putting your best animal in the main ring and your dogs in the other). It could be a positive thing - a learning and training area for new breeders, stewards and judges. But don't create an arbitrary, two tier system that differentiates on size. Size doesn't matter - we're small, but our hit-rate for ribbons at shows is about 90% because we only take animals that we believe are capable of winning. Many of the big breeders who come home with barrow-loads of prizes don't come close to that success rate.

If "they" want to create a second ring, why not use it for weeding out the larger classes (eg the white classes) before the main event, so that this can then run more to time and a single 1st can be awarded rather than 2 sets of rosettes? May be with a quicker turnaround more of "the public" would understand what was going on and stay to watch for longer?!

Whats the difference between a "big" breeder and a "small" breeder anyway?

I agree with your sentiments Mark,where has the British fighting spirit gone and the greater sense of achievement when you manage to get a rosette againt the best animals around.
The tougher the task the bigger the buzz when you are successful.
Surely everyone's aim is to compete in the premier league not in the play offs.

Thank you so much guys, your comments are all appreciated. I love you all!!!!! You are all welcome here for a beer and a barbie anytime!!

I have sent an e-mail to Di Davies the organiser of the SWAG Spring show and have also had a supporting e-mail from the previous Chairman of the BAS, Graham McHarg for which I have thanked him. Let us hope this ridiculous proposal is being weed upon from a great height as I type!!

Here,here.I agree.A pointless exercise.
Reminds me of the time my son went to the under 15's football training event. Everyone got a rosette for some skill or other and he got 'Best Endeavor' award which basically meant 'you're crap (which he was)but we don't want you to feel left out'