Despite the fact that my Sky box has gone bust in the middle of the last Ashes test I still feel that life is pretty damn great at the moment. I have been at the day job all week (apart from Wednesday) and am now off for ten whole glorious days! How fantastic is that!

On Wednesday Angus and I headed off early doors to the Gillingham and Shaftesbury Agricultural show. It's about 20 minutes away and is a really good day out. We took Al, Millie and Barney and were surrounded all day by smiling faces. Not only that but the sun shone throughout. A long day but a goodie! 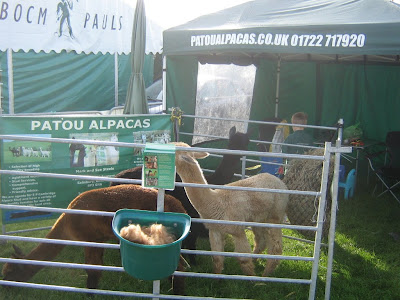 As you can see I took a really good photograph of the event! I blame the sun. I couldn't see what I was doing. Its rubbish isn't it, I know but it's all I have.
We also managed to get a full page spread in the local newspaper, The Western Gazzette. They contacted me before the show and I sent them some photographs and gave them the website address. The diligent journalist then copied parts of the website into an article about Patou Alpacas. How could anything go wrong with that you may ask? Nothing could go wrong, I mean I had written the website, it was our story, simple. Well most of it was accurate. Most of it apart from the bit where they described me as 'a village postman!'. Now there is nothing wrong in being a postman, they do a sterling job, especially the village ones, but why did they decide to make me one? There is no mention of postmen on the website? I didn't say I was or had ever been a postman, which I haven't. So where did they get it from? Who knows, that's journalists for you!
Still they published all the pictures I sent them and any advertising is good advertising so thanks to them. Just don't call me Pat.

Alpaca sales are still phenomenal, we have people coming today and Monday to talk about starting up herds and I am virtually sold out. I do have a cunning plan afoot to restock, more about that in a later blog.

The other thing that is exciting is we have a new TV arriving today. I know that may not sound very exciting but it's a long time since we had a new television and the old one is the size of a small car. The new one is black, sleek, shiney and .........well it's black, sleek and shiney, what more do you need!

Right that's it, time for breakfast.
Posted by Patou Alpacas at 06:49

Sounds great your day out at the Agricultural Show....

Its nice to know that the papers are running true to form, however, the advertising will work wonders for the Mighty Patou..

You might have to consider re-stocking a little sooner than you thought.

Enjoy you new TV and the 'limelight'...its a far cry from earlier in the year, just goes to show you never know what's round the corner and what the future has to hold......Jayne

Amazon.co.uk - ordered it yesterday, it arrived at 0815 this morning!

You can't complain at that sort of service... thats fantastic...Jayne