Right, before you read that headline and start reaching for the tissues, calm down, calm down, calm down dear, it's only me being silly. Josh the mad chocolate Labrador is fine. More on that after the latest up to the minute, hot off the press alpaca news.......

The news is that there is no news. There is nothing going on. Everyone who is supposed to be pregnant, is pregnant. The herd munches grass and hay all day and is pooping, a lot. All alpacas are doing well, absolutely nothing to report, zippo, nada, not a sausage.

So I thought for this blog I would focus on some of the other species living in Patouland. 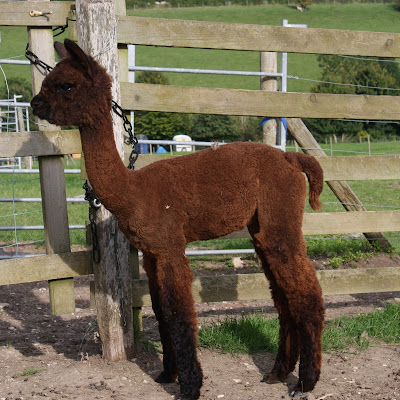 Anyway back to this tragic Labrador accident. As you may know we have two dogs, Josh, three year old chocolate Labrador and Kira, 16 month old Newfoundland. They are inseparable and play fight all the time, now however, Kira's bulk is starting to take effect. Her considerable size and power is slightly starting to overwhelm Josh who literally gets run over on a daily basis as the following pictures illustrate.

Firstly, Kira closes in for 'the kill'. 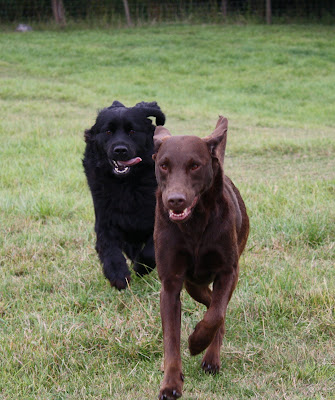 Then when close enough she pounces, and Josh is 'run over'. 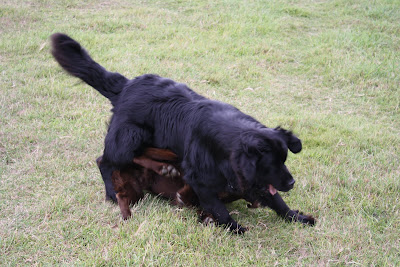 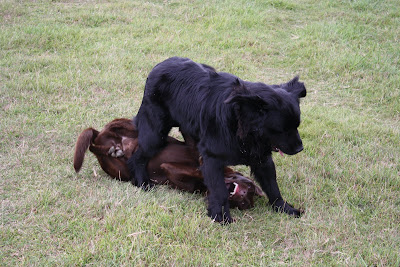 But this just invites a trampling on. 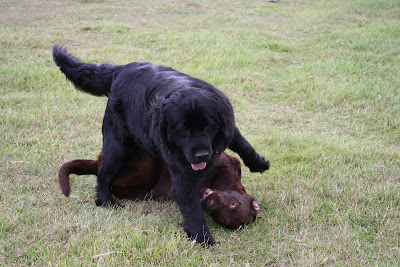 There is then usually a bit more general 'roughing up' before Josh is allowed up and the whole thing starts again. 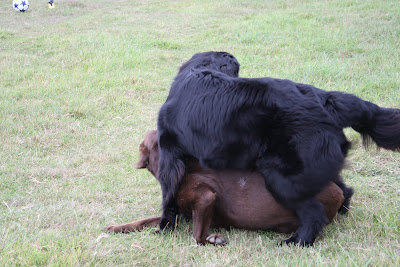 Next time, if there is still no more alpaca news, it may be time for the cats Belle and Sebastian to get a mention!
Posted by Patou Alpacas at 11:41

Roger is looking very handsome, nice to see that he is doing so well now after his ordeal after shearing.....Kira looks like a girl 'very much on top' !!..poor Josh...is loosing an ever growing battle by the looks of things !!....Jayne

I was referring to your last sentence in the blog - i.e avoiding cat headlines. A pun that got lost in the ether!

Honestly, the title scared me. I'm quite relieved they are both fine. They are beautiful!