Finally after much debate with my new best friend, Ranjit from New Delhi, we have been reconnected to broadband!
What a past 10 days we have had!
To cut a long and very tiring story short we moved in last Friday with The woofters (Josh and Kira). One cat (Belle) joined us on Sunday, the other cat Sebastian was captured on Monday swiftly followed by the chickens, Lulu and Doodle.

The mighty herd, meanwhile, gathered it's collective haunches in preparation for the big move. They knew something was up.

First of all there was much fencing to finish off, fields to top and a lot of general running around like headless chickens, however, late on Tuesday afternoon we were ready.

Four trips in the Mighty Herd Transportation Pod and we were all reunited, three humans, two dogs, two chickens, two cats and 39 alpacas and I can safely say that we all ABSOLUTELY LOVE IT HERE!!!!!!!!!!! (Well the cats and chickens will once they have been released from their respective cages.) 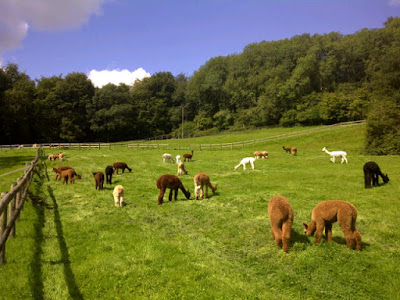 We have a really lovely stone cottage, a super garden and at least 10 acres of lush green alpaca grazing on our doorstep!

We had loved living at Chicksgrove but this is something else, it is simply wonderful.

Not only that but since we have been here I have spent the day at the Gillingham and Shaftesbury Show and two days ago we met a lovely family who have just chosen their three females from the massed ranks of the Patou herd to form their own brand new alpaca herd.

It has literally been non stop for us all and I am rattling around today trying to get stuff done before the day job grabs me again this afternoon.

Right that's enough from me I have to go and stand outside and laugh for a couple of minutes, no reason for it, just really feel like doing it!
Posted by Patou Alpacas at 09:53

That's fantastic!
Glad the move went so smoothly and everything is wonderful!

It looks fantastic, well done one and all. Any top tips for our big herd move would be greatly appreciated.

Great to see you settled in so soon...10 acres is an ideal amount of land too...and a sale well done!

That's great news, I'd been wondering how you all are, and very pleased it's gone fairly smoothly, all the best, Dave.

Fabulous - looks idyllic. Hope to be visiting you soon ;)

Looks like a great place, Mark, and the alpacas certainly found what they were looking for! Congrats to you all :-)

What a beautiful looking place. So glad the move went well!

Your new home looks beautiful, we hope you will be very happy there.