Come out Number 20 your time is up!

And so after a gestation of 360 days our 'cute as a button' Sahara finally gave birth.
It was an interesting experience for me as I had to 'go in' as they say.
At 9.20 this morning we had two front feet sticking out, but that was it, no nose and no amount of pushing and shoving on Sahara's part could progress things.
Sue lubed up and 'went in' to see what was what. The head was back. Sue huffed and puffed but couldn't turn it. We called the vet and stood around discussing things for a short while.

Now I must point out at this juncture that I have never 'been in'. Sue is a midwife (that doesn't make any difference apparently), she has been lambing and helped ewes give birth (surely that does count?) and Sue's hands are an awful lot smaller than mine (surely that is important!). Mine are definitely designed for 'not going in'.
As a result, if there is any 'going in' going on, it is always Sue that 'goes in', are you with me?

So as we discussed what was what and Sue said that the head just wouldn't move I said that I would have a go. I would go beyond where I had been before, I would 'go in'.
I washed my hands and forearms and lubed up and then for the first time ever I 'went in'.

First impressions were that it was nice and warm in there and there wasn't a lot of room. I could feel the head and indeed it was facing the wrong way. So, being careful not to break anything I managed to push and pull and rotate. I am assuming that all you readers who have 'been in' before will know exactly what I mean. Once the head was facing the right way, I knew it was because my thumb went in its mouth at one point and I could feel its teeth, I gently pulled down and crash bang wallop a big wriggly cria was on the ground.

This is what we got! A big strapping rose grey male . 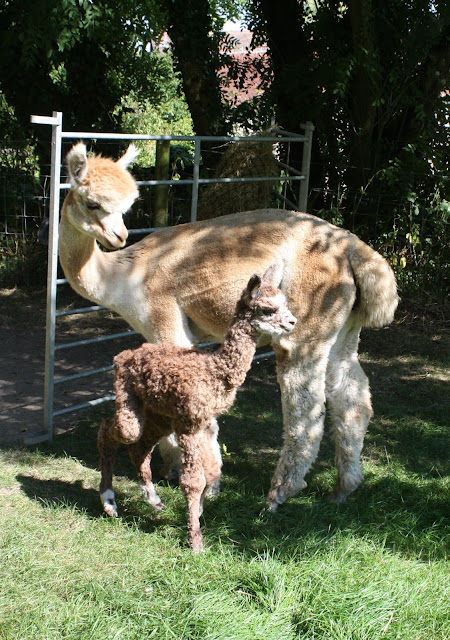 He weighed in at somewhere between 8 and 9 kilos. I can't be any more accurate than that as every time I picked him up in the weighing sling he sort of 'air-galloped' non stop. Suffice it to say he is strong!

Sahara is a beautiful fawn Columbus girl. She probably has the best fleece of all our Columbus progeny and she is without doubt the prettiest member of the Patou herd. We used Qjori over her and this is her first cria. Her mother, Dilly, gave birth to a grey male, Vickery (by Qjori), 3 weeks ago so it was always on the cards that we could get another grey.
After penning them in the shade for a few hours, he was up and feeding very quickly, I let them out after lunch and Sahara was immediately putting the little chap through his paces. Straight up the steep bank which is a short cut to the water trough (she had already drunk a bucket of water!). Fair play to the little man, he had one tumble from half way up back to the bottom and then he charged at it and was away. Like I said, he's a strong one. 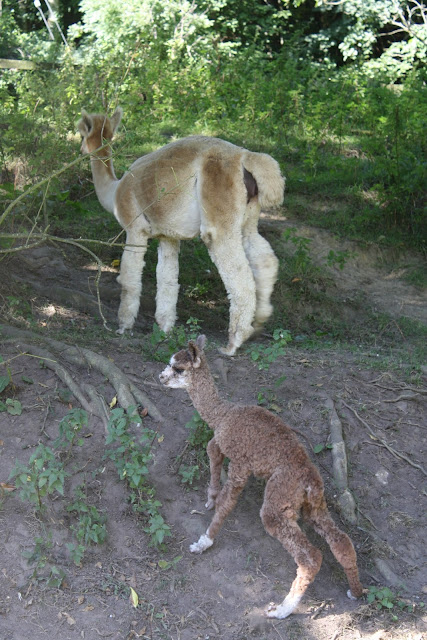 So that is it, birthing season for us is now over. We have increased the herd by 20 and it is soon to be increased by another 8 as we add to the black wing of the herd with some new genetics, but more on that when they arrive. Time, I think, for a large one!

Congratulations he looks fab...increasing the blacks hey...grey, black and brown (and we know you just hide them fawns and whites!)...only Appaloosa to go!!

Congratulations Mark - I had to "go in" for the first time last year - it was such a relief when everything worked out fine!

Great blog mark, if I ever 'go in' I know who to ask. Shure being a midwife has to count !