Switching seamlessly to Plan B.

Having slipped and slid and fallen and skidded and generally behaved like a rather fat and ungainly Bambi on the mud greased slopes of our fields we decided to switch to plan B last weekend.

I decided that we needed to check the herd properly on a flat, dry, non-slip surface so we set up a pen on the driveway which is flat, dry and covered in non-slip gravel. The operation was a great success as the alpacas loved coming out of the field and running down the road through the village. All went ridiculously according to the plan which was fantastic.

I had also decided to treat the whole herd against coccidia and worms. This is not something that we normally do at this time of the year, the whole herd had been treated against Coccidiosis in September and wormed and treated against Liver Fluke in November. However, as it has been such a mild and wet winter we needed to tweak the usual regime. Due to the weather, half of the land is waterlogged so grazing areas are tight this year and poop picking has been impossible. Not only that but we have had a couple of females showing signs of abdominal discomfort so to be on the safe side it was decided to treat everyone. Everyone was also due for AD&E and some toenails needed cutting, again as it has been so wet toenails weren't getting worn down. Basically they were getting the whole works, a complete spa day for all!

The female and cria herd is split into two, with 25 on one side of the road and 28 on the other, so to keep it simple and with a dry and sunny weekend predicted we decided to do one side on Saturday (there was rugby to watch remember so outdoor time was restricted) and the other on Sunday. The herd is led by Millie and Vanilla, on the charge, Sue is operating the camera and controlling the rope across the road (multi-tasking) guiding them into the newly constructed 'dry-pen'. 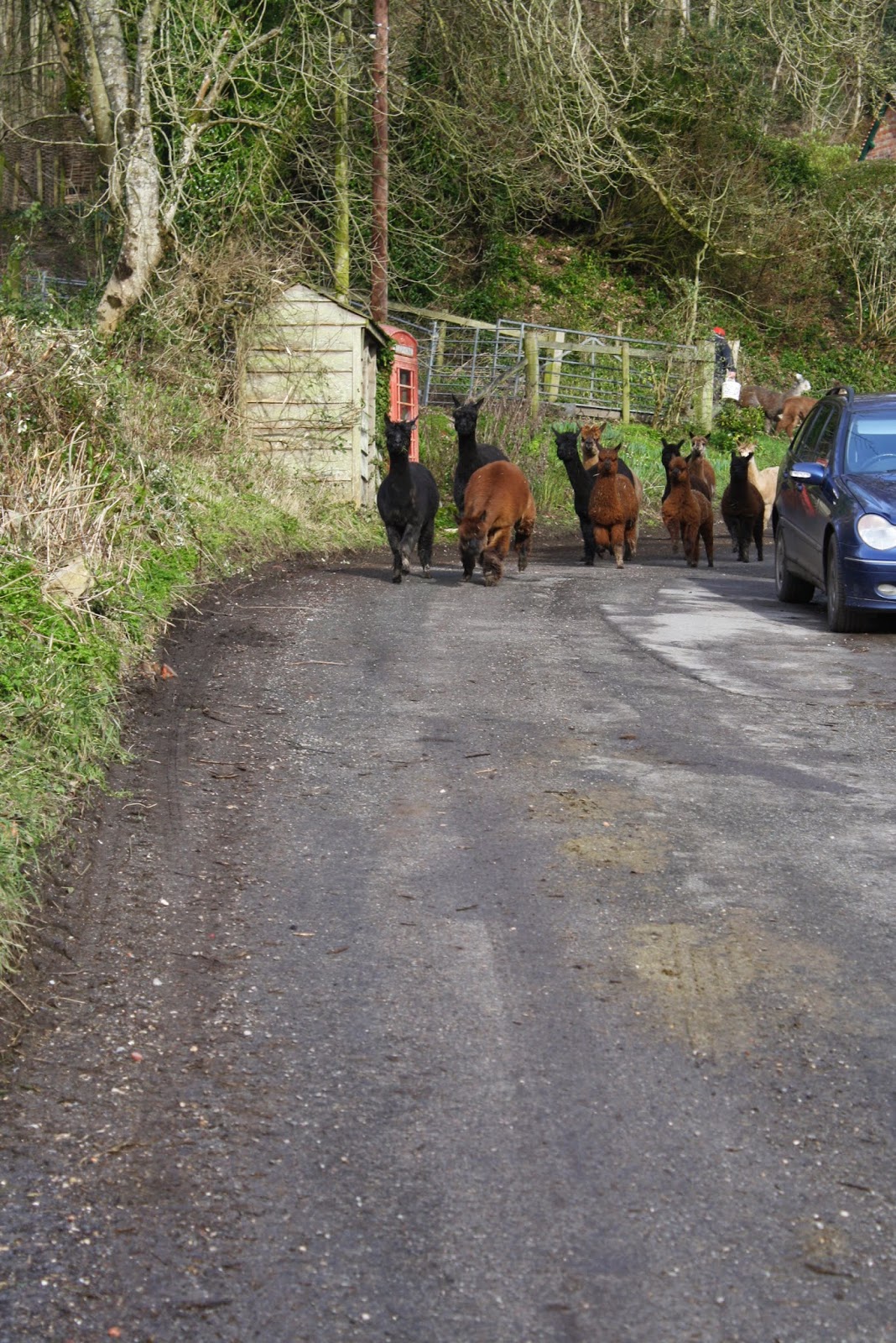 I was wearing my red hat in honour of a Welsh victory on Saturday and bringing up the rear with Gus and his friend Dennis. 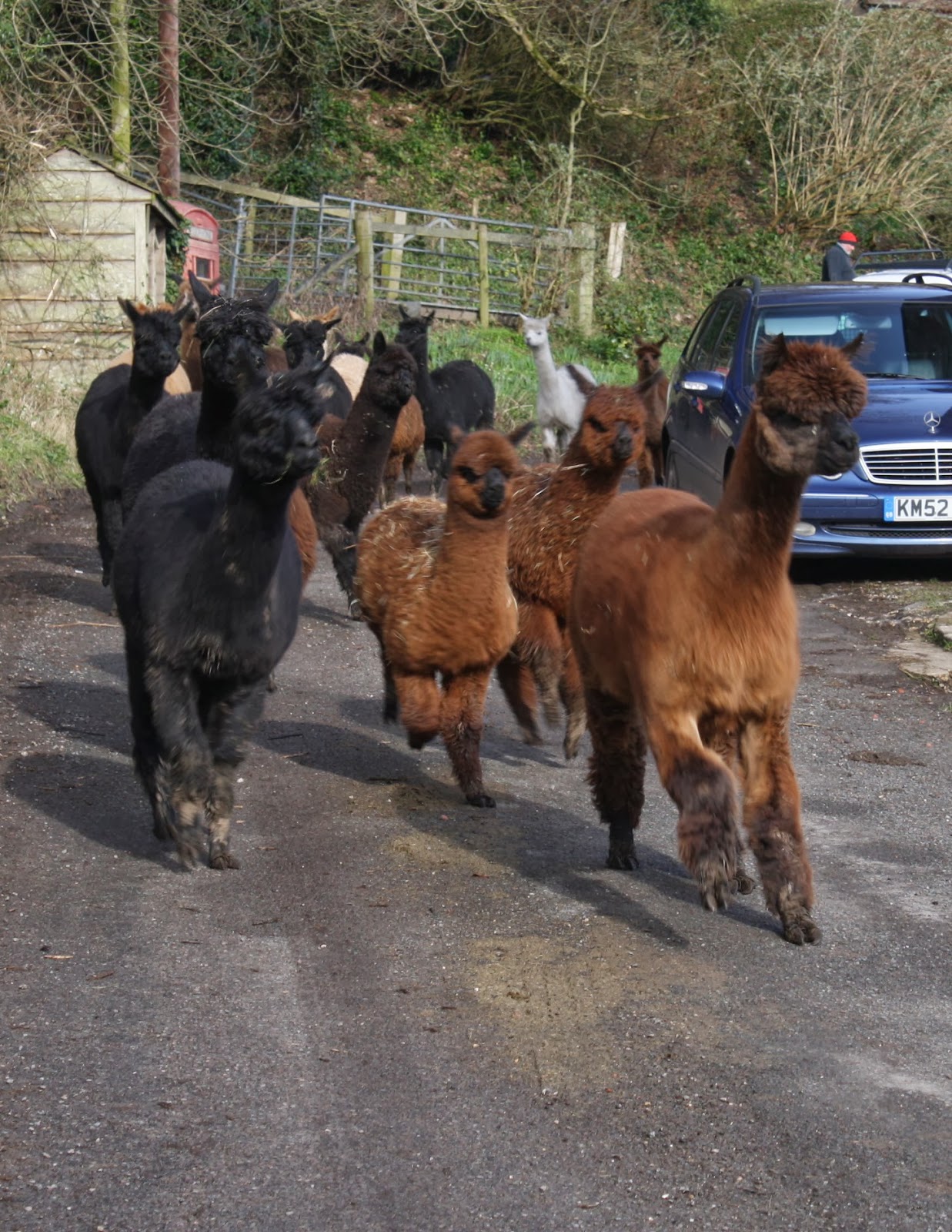 Sahara and her brother Vickery needed a little cajoling to join the rest of the herd. 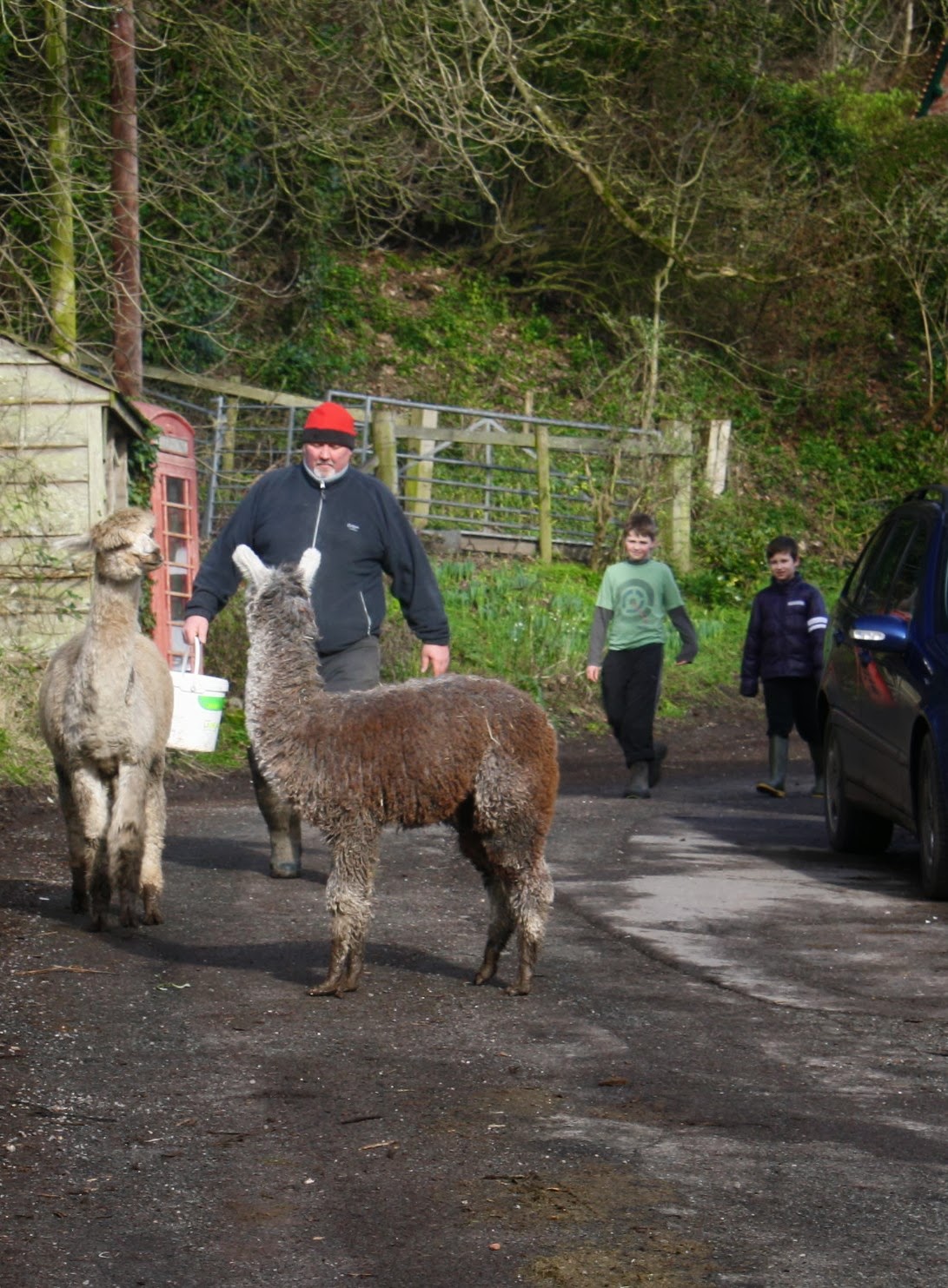 With the herd in the pen we could get on with the job in hand in a fairly relaxed manner. I was even confident enough to promise Sue that I wouldn't throw a tantrum. Two hours later and they were done and I just about kept my promise, restricting myself to just a few swear words, I think. 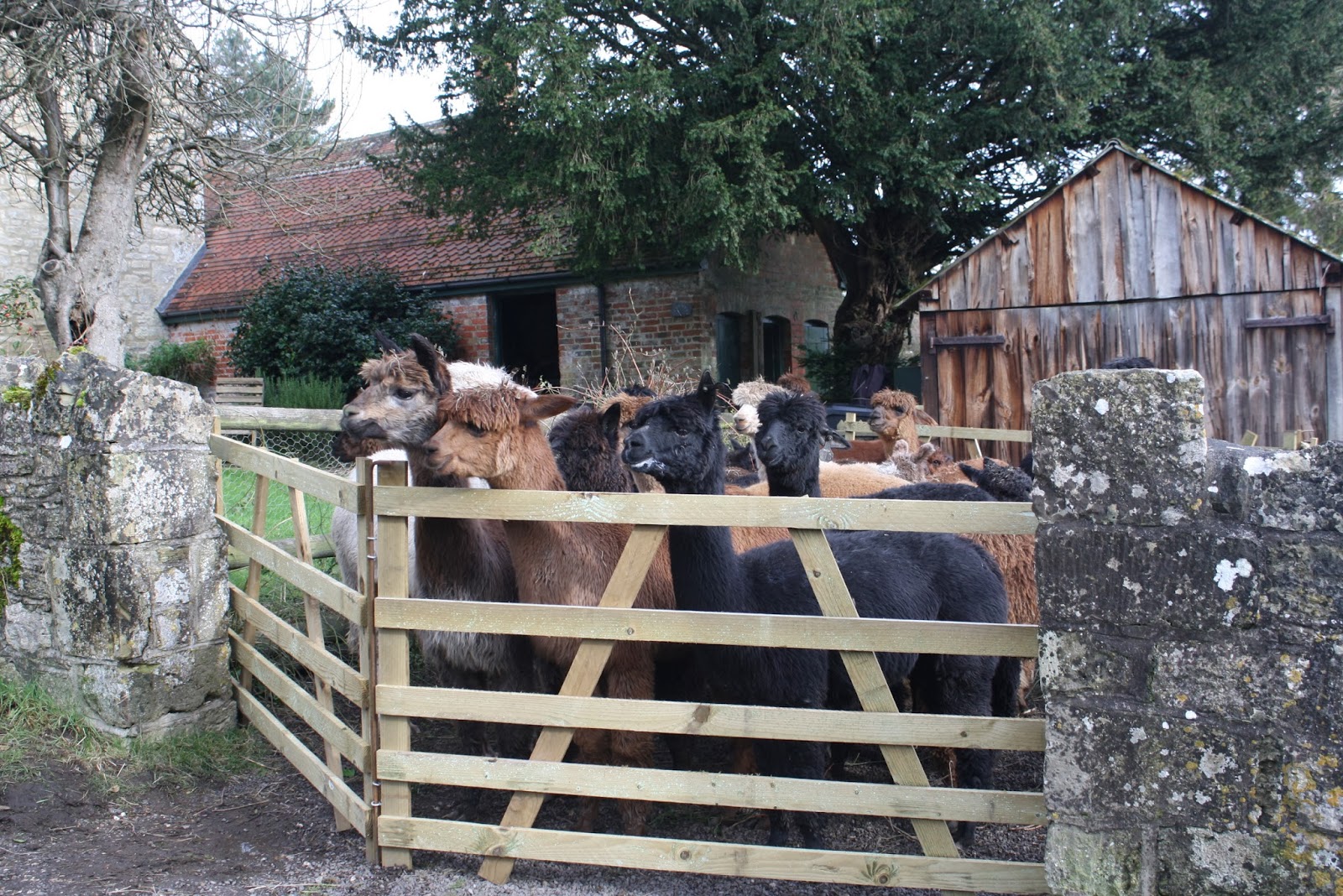 We used our newly purchased and cheap wooden sheep hurdles to pen them in. I think they will look nice at church fêtes and village shows later in the year. 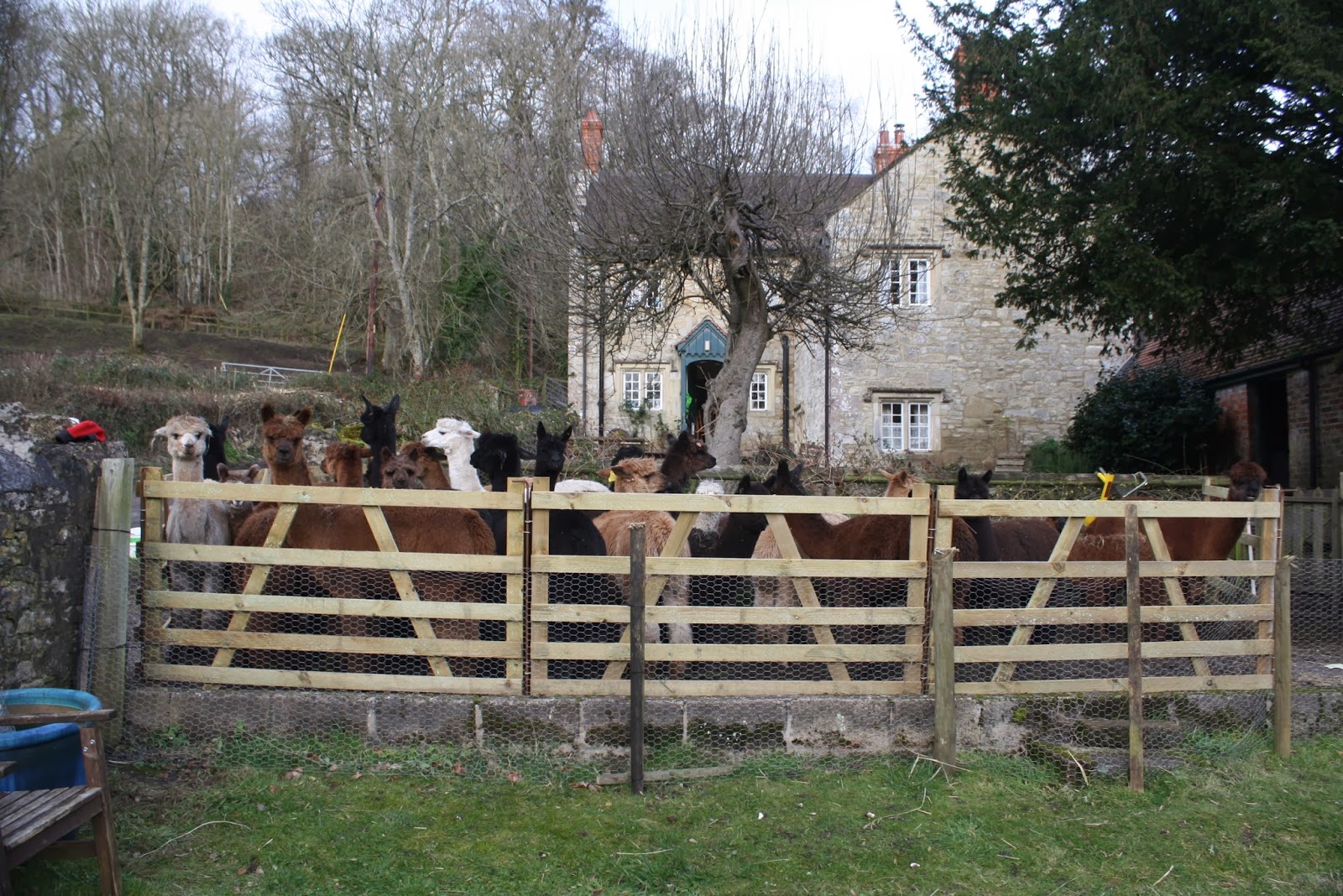 As it was a virtually rain free day the previous day the alpacas were dry which made things so much nicer for all concerned. Here is Polly and her daughter Waikiki waiting for the return trip up the road. 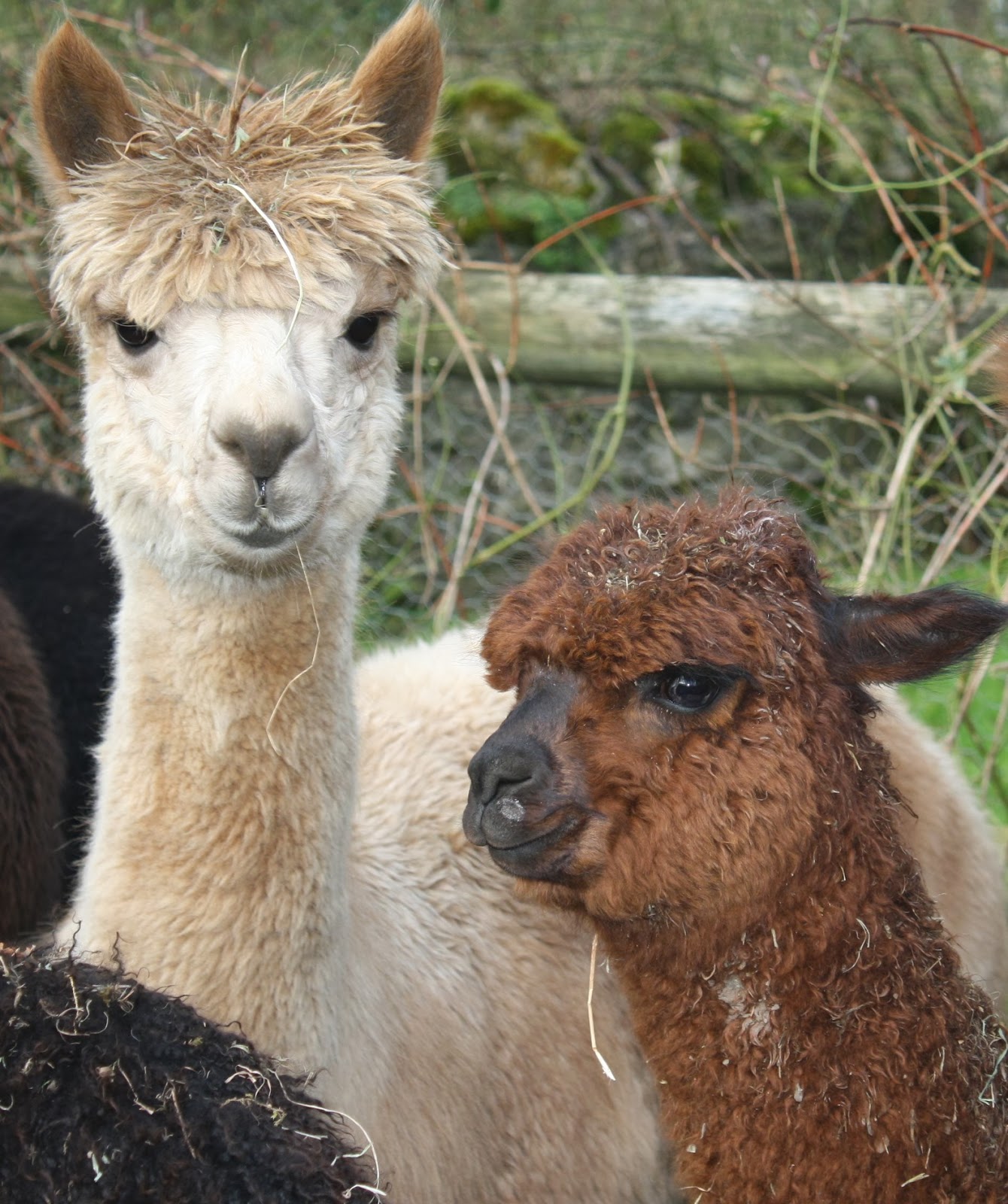 This is little Wesley, a Popham Thunder son, absolutely cracking fleece but a white spot on his chinny chin chin means he misses out on getting a spot in this years show team. 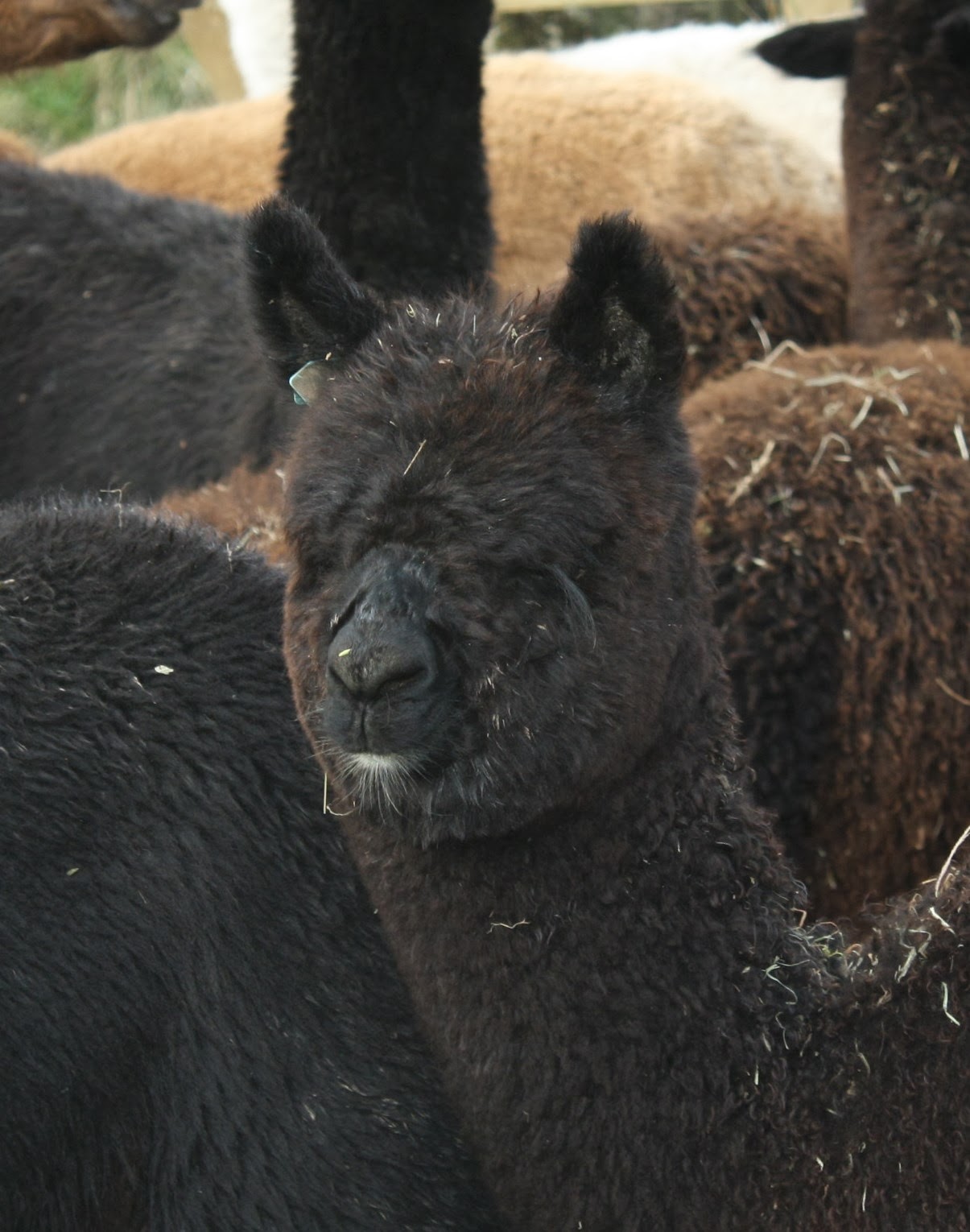 So there we have it, an action packed weekend in Patouland and as it went so well we will carry out all future husbandry on the driveway. Pats on the backs all round, aren't we clever.
Posted by Patou Alpacas at 11:24

Don't you just love that feeling, when all goes to plan and you are on top of the jobs.

Great blog, but your alpacas definitely look cleaner than mine. I bet you turn up at Telford with perfectly presented alpacas!

For a "brown" herd...I see lots of black is black the new brown I wonder?!

Bet it created quite a stir running the herd through the village!

Wesley looks super with his little spot on his chin, nothing that a touch of dye wouldn't sort out ;0) The wooden hurdles look lovely, sounds like a great dry day getting all the jobs done, in time to watch the Rugby ..... perfect .... Jayne

What a thrilling sight that must have been! The massed Patou Ranks, under strict control of their leader (and helpers!). Could only have been more impressive if you had been weilding a sword and blowing a trumpet!