Stand by for my serious bit.
Well Blogmeister Bob seems to have provoked some discussion about a certain article in the Telegraph. I have to admit I chucked in my tuppence worth this morning and am glad to see that our leader appears to have been grossly misquoted.
I have had many dealings with the press (albeit only the local hacks) in my day job and I'm afraid it would seem the old adage of 'not letting the truth get in the way of a good story' still rings true.
The way reporters can basically say what they like by bending, twisting or simply making up their reports defies belief. If anyone has the backbone to complain then a small apology may be printed on the bottom of page 154 a few days later. Hopeless, the damage has been done.
Sadly these fabrications are not solely the domain of the tabloids. This country has an appalling reputation as far as the media goes with sensationalism and 'celebrity' hounding seemingly important coverage. I think not. It is just contributing to the moral decline of this nation of ours.
There endeth the serious bit.
We are still waiting for our first unpacking of the year. Emma is now 11 months and 12 days so she may have a bit of time still to go but I am so impatient, I want it all to kick off.
We have twelve cria due in total and I really, really want to be here to see all twelve pushed into the world. Sue and I manage pretty well to cover most days between us, if I'm working Sue isn't and visa versa. If we're both working Sue manages to pop in from time to time to check. All the heavily pregnant ladies are right up in front of the house so it is very easy to check.
We will have eight of our own females to get pregnant this summer and quite frankly I am very excited about the prospect. We have decided on using three herdsires.
Patou Lily our Shaft's Dream girl who took 2nd place at the BAS Spring Show last year (against some pretty tough competition I might add) is going to be covered by Koricancha Sinbad. We bid for and bought a mating with him during the Futurity Stud auctions and are vey much looking ahead to the result next year. She is currently expecting a Centurion baby which is also eagerly awaited. She is, as readers of this blog will know, my favourite alpaca in the whole wide world.
The rest is a great big fat secret.
Actually its 10 past eleven, I'm tired and I want to go to bed.
Here's a nice picture of Poppy our recent rosette winner. 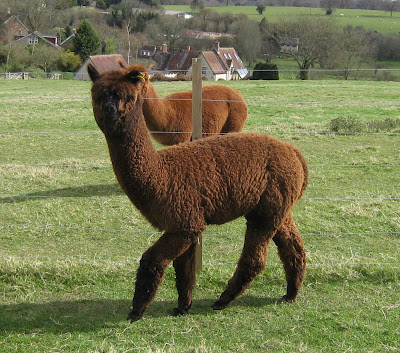