Well folks what we were waiting for has arrived.

Our first cria of the year arrived at precisely 4.05pm today after a little help from yours truly.

Valley Farm Emma started showing signs late morning that things might be happening. Sue had come home for lunch from work and was monitoring the situation and keeping me appraised. I was at work and wriggled like a very wriggly thing to get out and on the road at 3 o'clock (in other words I bunked off two hours early............well it was a medical emergency wasn't it?). I was home at 3.30 and was just in time to see a nose appear.

By 3.50 a head and two feet were poking out and Emma was lying down. Fifteen minutes later and I moved in to get her up and as she stood I guided the cria out. She basically fell out but I feel I helped a bit. Out she popped.

She isn't very big weighing in at 6.75kgs but she seems very strong and healthy. She was up on her feet almost immediately. In fact when she was hanging out her head was up above Emma's back line. She was looking around.

Placenta was passed within two hours but in two parts so I gave Emma a shot of antibiotics on the advice of 'he who knows all'.

Shortly after that and she was up and suckling away. She is a very pretty medium fawn girl with white markings on her head and neck.

We haven't named her as she belongs to Sue Lucas at Valley Farm Alpacas who has asked us to sell Emma and her sister Valley Farm Sheba. 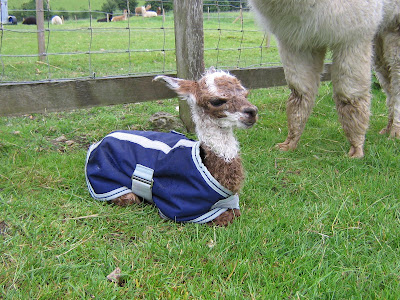 We haven't named her officially but Flossie seems to be her temporary name. Well you have to call them something don't you?

One down and eleven to go!
Posted by Patou Alpacas at 19:14

Well done, and a girl too!
Debbie

Thanks Debbie. Flossie doing well and we are looking forward to some more joining her soon!
Hope all is well up north.

Hi Mark - well done on the new arrival. And such a swish new jacket as well. You'll need to tell me your source of those. BTW - I recently helped birth my first llama cria on the advice of the same "two-piece placenta expert"! Gerry - Coire Alpacas