What a super weekend. After 6 days of, well lets just call it an upset tummy, I finally recovered and was able to enjoy some glorious sunshine.


On Sunday the Shaftesbury and Gillingham Show Society staged a Town & Country Fayre.

The mighty Patou team joined forces with the leviathan that is team Inca and we offered a double pronged attack on the show visiting public.


In a prime position we pulled out all the stops, at this point I must mention that we finished pulling out all our stops long before the Inca tribe. They looked professional. We looked.............well we looked willing.


If I can use cricket as an analagy, Tim, Tracey (and Oliver of course) were the opening bowlers, sleek, fast, well groomed and looking seriously threatening to the batsmen. Sue, Angus and myself were fielding in the deep, chasing everything that moved and hurling the ball back in with all our might. Keen as mustard we were ready to chase the ball all day just like a pack of young Labradors!

Anyway enough of that tripe, even I can only take so much. Suffice it to say the show was very well attended and we were able to spend the day in good company, although we were constantly interrupted by people wanting to ask questions.

Seriously though I think between us we educated a lot of people and were very encouraged by the positive responses we received from the public.


We even took some animals into the show ring. Team Patou doing the leading while Captain Timbo of Inca waxed lyrical about alpacas on the tannoy system unitil the long shepherds crook appeared from the organisers (metaphorically of course). Great stuff.


I did take some photographs of the day but to get both camps in the viewfinder I had to stand way back and to display the picture here would be meaningless. However, there is one photograph I simply can't help but publish. Come lunch time, cometh the boy and cometh the boy cometh the man size pie! 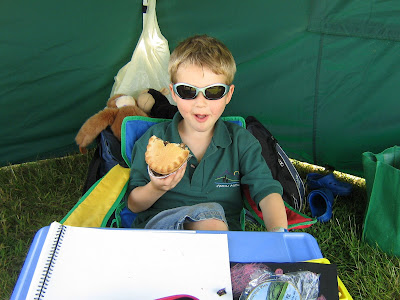 Thats my boy! Steak and Ale if you're interested.
Posted by Patou Alpacas at 18:20