A new shed and someone is 7!

Anyway first up is the arrival of the new multi-purpose alpaca shed. It was supposed to be here at the end of December but due to some weather difficulties it arrived today. What a beauty it is too! It is a large 24' x 12' 'mobile' shelter with, as you can see, gates and stuff.
It will be used as a general shelter, sickbay, storage unit, alpaca toilet (obviously) and all weather feeding centre. I am rather pleased with it. We can't have a barn or anything quite so grand due to restrictions on the land and in the bank account so the new shed will do the job.

Two gents arrived from http://www.stablesandshelters.co.uk/ (who I would thoroughly recommend) and constructed it in the field in quick smart time, well done guys, good job!
I couldn't take a photograph of it completed as they were still working away as it got dark and I had two small boys to fill up with hot chocolate. They had snowballed themselves (and me, and Josh) to a freezing cold footed standstill. 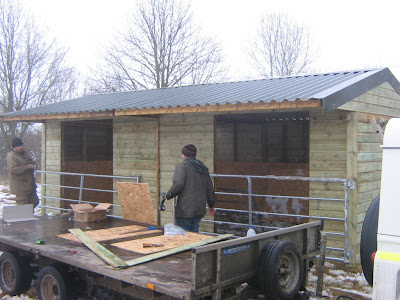 The second item of news this week is the seventh birthday of Angus the mighty son of Sue and I. His birthday was on Monday of this week and he is pictured below with this years cake masterpiece, a volcano, magnificently baked by the lovely Mrs S. 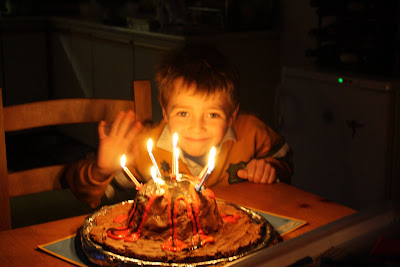 We had a lovely supper together and we will have a birthday party in the summer for him as he wants a 'cycling party', whatever that is! Planning is underway.
The third piece of news is probably a bit pre-emptive and I will probably be rebuked for mentioning it now.
On Sunday we are going to meet a 6 month old Newfoundland puppy. She is called Kira and is black and beautiful. As regular readers may remember we lost our old lab, Bryn, at the end of last year and we have been toying with the idea of getting another dog to keep Josh company. An oppportunity has come up to take on Kira and we can't wait to meet her. Now before any of you say anything I know that Newfies are enormous, slobber everywhere and eat massive amounts of food. I know, we know, we have researched it carefully and thoroughly. We know what we are letting ourselves in for. When I informed Angus that Newfies were officially the strongest dogs in the world, positively mighty actually, it was a done deal, decision made.
All being well she will be coming here to make her home in Patouland next week.
Breaking News!
I have been looking after Angus (7) and his best friend George (6) this afternoon and whilst munching on sausages, chips and beans they have come up with a masterplan for making a serious amount of money. Apparently they are going to draw a picture of a chocolate pudding and sell it on ebay. They tell me that lots of people are going to want to buy it and that it will sell for two hundred million pounds. Job done, we're all rich.
Posted by Patou Alpacas at 17:10

Firstly in priority order...Happy Birthday Angus...I wish I was 7!...secondly & thirdly...what a lovely idea a Newfoundland Puppy...I've got a big slobbery oe up here...shes the size of a horse ad eats like one !!...what a fantastic fieldshelter...looks very nice indeed...a mobile toilet !..what a good idea....hope you have lots of fun with your lovely new puppy......look forward to some nice pictures...hope all goes well..............Jayne

I know! Too much news!!!! Congrats on the shelter. It looks great. It is similar to ours but looks possibly even more swish. The gates are a great idea which we could copy. Happy birthday Angus!!! And very exciting about the Kira. She will no doubt be happy to join the mad throng at Patouland. Good luck with all that! Lucy

Good blog, congratulations on your erection

Wow what a bundle of good news.

The field shelter looks great. I can't wait to hear more about Kira.

Plus....I want some business advice from your son and his friend!!!