There's a bear in the house!

I must open this edition of the blog by announcing that the time of the anticipated arrival of our new addition has come and gone. Yesterday we went to visit an eight month old Newfoundland pup called Kira (pronounced Keira, as in Knightley.....oooooh errrrrr!). We ended up leaving minus a huge amount of dosh but with her in the boot of the Discovery. Well, she started off in the boot, with Josh, but ended up on the back seat with Angus..........mmmmm interesting start.

As you can see from the below photograph she is irresistibly gorgeous and her fleece, I mean fur, is soft and as black as coal. 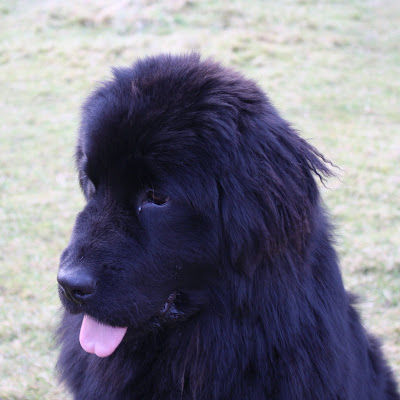 She gets on well with Josh and I took the camera out this afternoon into the alpaca field.
That is where the first startling revelation took place. You see Kira looks like a big fluffy bear but we have hands on experience with her and know that she is mostly fluff at the moment, sporting a particularly sleek frame under all that black stuff.
As a result she has some pace to her.
She can shift.
Josh, being a rather streamlined Lab can also shift and has frequently been referred to here as the chocolate missile. So I was surprised to see that Kira was catching up with him! I don't think he was going full pelt because he really, really, is a missile when he opens the taps but I think he was surprised by Kira's turn of speed.
As you can you see from the below picture Kira is not far behind the 'missile'. But it was not Kira's speed that was the revelation. No.
No, it was something far more sinister. Something we have not seen for some time here, something that is lower than a snakes undercarriage and is quite frankly frowned upon at Patou HQ.
Photographic evidence proves it. The below picture shows Josh toying with the new arrival, easing ahead with his superior speed and sleek leg extension. He's just not bothered. He's probably chuckling away to himself, thinking of what's for supper maybe. 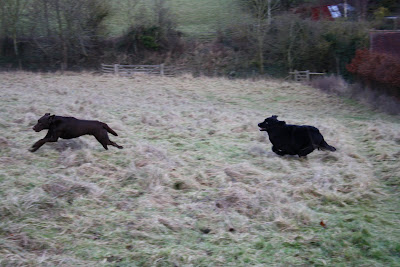 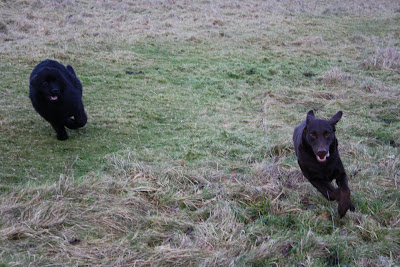 Following such monumental cheating there could be only one end result. Poor old Joshie was completely oblivious to the low down, sneaky behaviour that was going on behind him. 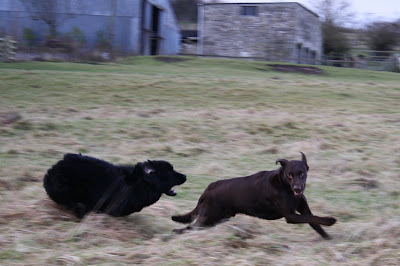 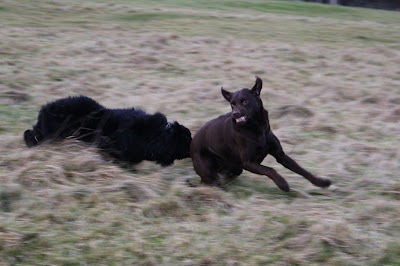 There then followed a 'discussion' between Josh and Kira whereby Kira may have realised that she might have made a mistake. We shall see. Kira is only eight months old and is about half grown, Josh may have to be careful!!
Anyway as this is an alpaca blog I must report that apart from the screeching from Judy every time she sees Kira things are running smoothly. Kira is not really interested in them and they are wary of her as she's new. 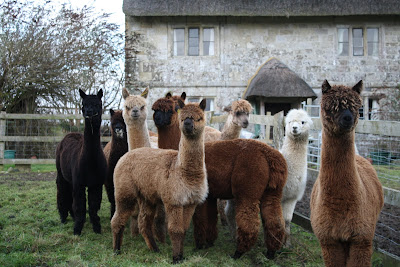 Here we have (left to right) Lily (my favourite alpaca in the whole etc etc), Minstrel, the gorgeous Fifi, Poppy, Penny, Bobby, Samson and the equally gorgeous Millie.
Big husbandry day tomorrow so more alpaca stuff to come.
Posted by Patou Alpacas at 18:11

Kira looks fantastic !!....apart from the fact that she is a cheat on the old corners...!!! Poor Josh...bitten on the botty !!..how cheeky is that, from the new girl !.. I think that you will have your hands full looking at things....you forget what it is like to have a puppy in the house !! But I think you will soon remember....chewed shoes....large chocolate presents...etc !! not to metion the ever growing Newfoundland....no doubt sitting on your knee.....just wait till shes about 8 stone !!....having a cuddle......I made that mistake with Zonda....she's now bigger than me, but still tries to sit on you !!.....Alpacas look lovely !..by the way......Jayne

Very amusing, in fact I laughed so much I felt the need to produce my own chocolate missile. Regards, Marcus Byke

Kira look nice.
I just love that photo of the pacas!!