Clump has a new friend.

Regular readers of the blog will know that our resident herdsire, Cambridge Columbus, (Clump or The Clumpmeister to his friends) has been in solitary confinement for the past few months as he sorts out his hormones. Hopefully when all the girls have got to three or four months pregnant and there is no more work for him for a few months he will calm down and be more sociable. 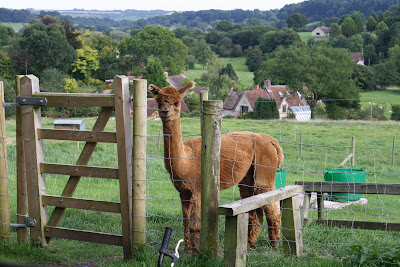 Clump lives in the paddock at the top of the hill directly in front of the house. He can see his girls in the field in front of him easily there and so doesn't panic about being on his own. He also has freedom to roam along the short runway that is at the front of the garden. Consequently being an inquisitive alpaca he is frequently to be found standing at the garden gate watching us as we sit on the patio some 10 or twelve feet away. 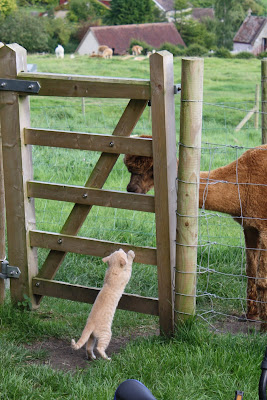 On Monday as we sat out having a barbecue supper, Clump was visited by young Sebastian one of the kittens. There was a certain amount of staring from both sides and a nose touch which I missed. However it was lovely to see cat/alpaca interaction which those of us with cats and alpacas will be familiar with. 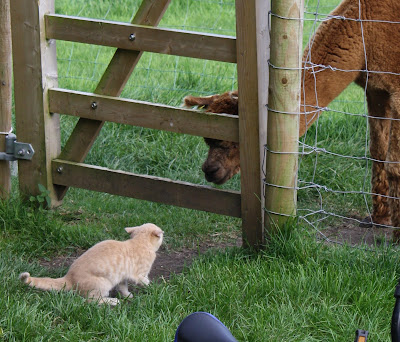 Sebastian was the first one to break after about three minutes as Clump tried to stick his nose through the gate. If Seb had been a tiny little male alpaca no doubt Clump would have opened the gate and given him a good shoeing, still there we go.
Posted by Patou Alpacas at 17:17

What a quintessentially English scene - lovely - the pic of Clumpo in his field I mean! Seb is gorgeous. Our males all seem to get on - maybe we are really lucky? They are even next door to the girls and they don't seem bothered.