The old lady of the herd.

The oldest alpaca we own is a lovely medium fawn girl called Dee (full name Indira of Cambridge). But it is not just her age (she will be 12 later this year) that sets her apart from the rest of the herd.

She is the quietest, calmest alpaca we own, she is the only alpaca we own imported from Chile and she produces lovely cria, all of whom inherit her 'supercalm nature'.
In short our Dee is a bit of a favourite here, she's lovely in every way.

She arrived here 2 and a half years ago as part of a consignment from EP Cambridge. We had them to sell as we looked for ways of raising money for stud fees etc. She came with 4 or 5 other females but was the oldest, and in our opinion the most attractive.
She very quickly became a firm favourite here. She would be found calmly standing at the garden gate on her own, as if she was waiting for us to say hello. In short we fell in love with Dee and bought her ourselves, together with her fist cria born here the scrummy Fifi. 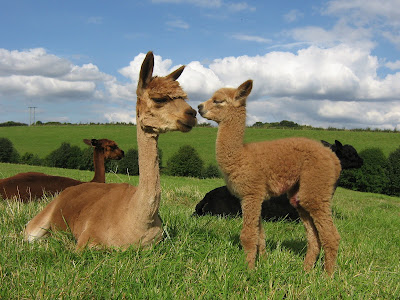 Dee has always had a mind of her own, never feeling the need to follow the herd as they circuit the field. She loves the field shelter and if she has access will basically 'move in'.

It has had me wondering what sort of life she had in Chile? I would bet that she had a pretty nice life, with decent people looking after her. People who I am sure would have been sad to see her go, poor people, obviously, but people who cared about and valued their animals.
I wish I could let them know that Dee (who knows what name she was given at birth, if any?) was being looked after well here in the UK. Maybe they would want to know, maybe not?

Dee is also a bit of a worry at times. She has periods where she is not quite herself, she becomes a bit lethargic, doesn't graze as much as the others and just generally looks under the weather. It happens every six months or so and after initially calling the vet when it first happened we have learned how to 'set her right'. As long as she is up to date with worming and coccidiosis treatment we give her a jab of antibiotics and stick her on a course of Vetrumex or Pro-rumen to settle her stomach and get her running smoothly again. It seems to work every time. I don't know why it happens, I suspect she has some damage caused by parasites in Chile that gives her problems every now and then, maybe it's just her. Whatever the reason we will keep 'putting her right', because we love her.
Posted by Patou Alpacas at 19:15

Dee looks a lovely lady, some of these older girls are quite special, its lovely that you can recognise her condition and make her better....long may it continue....Jayne

She sounds great. No wonder you love her.

She also sounds almost exactly like our Wayra, who is also very calm and follows her own mind.

I'm reading your blog in the Netherlands, I like very much, can you tell me how the Alpackas taste? do you manufacture your own meat product?

Thanks for reading. We don't eat alpacas here in the UK and I have never tasted alpaca and so can not answer your question.

I think you should look at making it your own meat productions. Why is it the English do not eats Alpaca? You have food from animals Pig and Cow in bacon and sasage so its no different?