A long day on the road as a new herd is created.

It was an early start for me today as I was off to deliver three alpacas to new owners on the Leicestershire/Warwickshire border.

First of all though I was in stitches before I even loaded up. Newly arrived in the large field behind the alpaca field are about 50 thousand sheep. When I went out at first light this morning (about 6.45am for those who have the luxury of lying in) I called the alpacas up so that the travellers could be separated out. I usually whistle to get their attention and then shout 'Come on' enthusiastically at the same time rattling a bucket which gets them on the move.

This morning the herd were at the far end of the field, the sheep end. I whistled and they all looked up the hill at me, ears erect, waiting for further instructions. Behind them on the hillside were the massed ranks of the newly arrived sheep, silent and also watching. I then shouted 'Come on' as normal and I swear every single sheep baa-ed in unison at me. It was deafening and quite extraordinary. The sheep fell silent. I shouted again............bugger me if they didn't roar at me again! It sounded like they were all baa-ing 'NO'. On top of this the alpacas had stopped moving towards me as if they were obeying the sheep. There was confusion in the ranks of the mighty Patou herd. The girls looked at each other as if to say ' Ooh er this is new, we want to go... but the sheep, the sheep say no!' By now I was having fun with the sheep. They fell silent and I shouted, they all baa-ed. It was great! I called to Sue, I needed a witness this was seriously bizarre stuff. 'Watch this' I said. The sheep were silent, 'Come on' I shouted, the noise was deafening as the sheep protested strongly. I must admit I could have stayed there all day it was fab! Anyway eventually the alpacas succumbed to the rattle of the feed bucket and left the silly sheep who looked like they really couldn't have cared less anyway.

So I set off with Sophie, Joy and Henry and three and a half hours later I arrived at the empty and newly prepared field that was waiting for the first three members of Clover Park Alpacas. Bill and Linda Lyons were there to welcome us and the herd is now up and running! 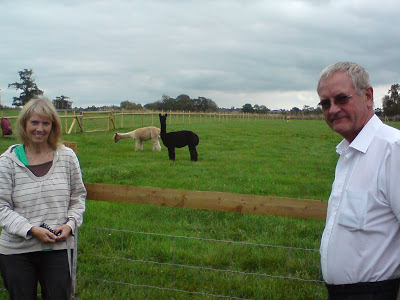 Here are Bill and Linda (seriously nice people by the way) with Sophie and Joy, Henry is in the far distance as he settled in immediately and claimed most of the field as his own!
There then followed a tour of the estate, very nice, (I was impressed) and a husbandry lesson.
Then I was invited out for a lovely Sunday lunch at the local pub. Most splendiforous indeed, great company and good food (not to mention a lovely pint of Old Speckled Hen).

I finally got home at 6.30pm with some lovely 'Clover Park' hay in the trailer.
Thank you very much to Bill and Linda, I look forward to seeing you again and keep living the dream!!
Posted by Patou Alpacas at 19:04

Glad you have had a nice day. Ive had a strage and stressful day with the new arrival..Im hoping things will improve tomorrow!

I should think the sheep were shouting back "go back to bed"!!

The alpacas new home looks and sounds very nice - lets hope their new owners enjoy their new found alpaca bug like we all do!

That could be your new vocation - sheep conductor!!! Glad the pacas have settled in well.

Did yer get zum cream cheese to boot?

Mary Lee, Gordon, Graham, My Oldest friend (his words) please for goodness sakes give the cheese thing a rest.

We went to a cheese festival granted, we bought some cheese, most people did, I would expect. It doesn't warrant all this cheese stuff.

I know, I know, this is just going to fuel you more. STOP!