So to the Sturminster Newton Cheese Festival? It was fantastic!
We had been invited along with some of the alpacas and we pitched up at about 8.30am to find a really lovely showground with mown grass and nice white tents and all squeezed into this great space right in the centre of the town. It was lovely.
We set up and hit the bacon butty stand which is an absolute must at a show.
From then on we were surrounded.
One of the show organisers revealed that they had 4,000 people through the gate in the first hour! All of them were greeted by the lovely Lily, Fifi and Amelie as we were the second stand in! They flocked to us, cooing and oohing and loving our alpacas massively! It was awesome dude! The girls took an hour or two to settle in but really were the stars of the show. 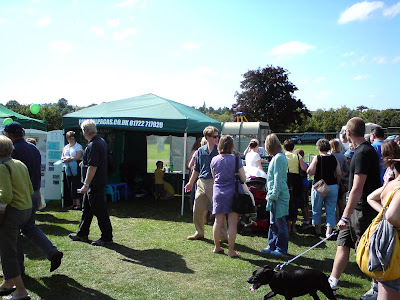 Our little stand early on, Angus manning the tent. At this point I should mention that we forgot to take a camera so the mobile phone came out, as a result the pictures are a little hit and miss, it was so sunny I couldn't see what I was pointing at, nothing at all to do with the scrumpy. Well it does go very well with cheese! 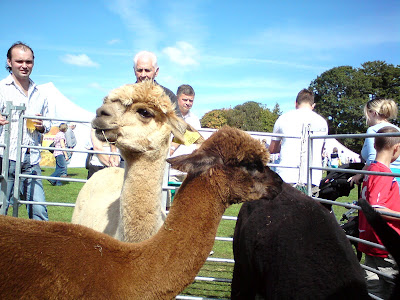 The girls, who had all been to shows before, soon settled in. Fifi, here nose aloft, has caught a whiff of some welsh goats cheese (a favourite of hers) and soon had me traipsing off to buy some. Lily is head down troughing on a Jarlsberg fritter with a parmesan crust (she nibbled all of the crust off before sucking on the Jarslberg centre, so childish). Amelie has eaten her Stilton and Nowegian blue souffle a little too quickly and was a little bit sick just after the photo was taken (youngsters eh!)
There then followed what only can be described as a cheese frenzy (well we were at a cheese festival!) and after elevensies (cheese) and lunch (more cheese) the girls had had enough and lay down in the sun for the rest of the day, point blank refusing to stand up and chat to the assembled crowds. 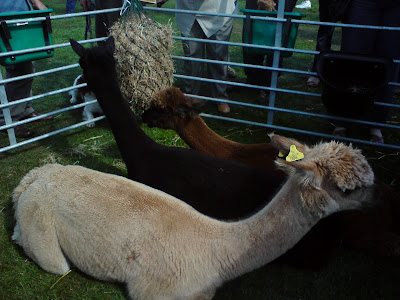 It was a great day out and we have booked ourselves in for a return visit next year. If you are in the area when it's on next year it really is worth a visit.
Posted by Patou Alpacas at 18:57

Were they're any o that there Dairylea on show? Oi lurves it

Behave yourself Old Dunker....I know where you live....