Today in the sunny south of England we were supposed to be shearing.
Unfortunately the weather gods who smiled on us on Saturday were NOT SMILING TODAY YOU SILLY BLOODY WEATHER GODS!!!!!!!!!!!!!!!!!!!!!!!!!!!

I was up at 6am and the herd was saturated, soaked, drenched, dripping, they were wet guys, very wet. The weather forecast predicted more rain so a phone call was made and shearing has been postponed until Saturday.

Still life goes on and as we had lost a chicken at the weekend (Snowflake our light Sussex hen decided to keel over), Sue and I went off to buy a couple of replacements to keep Lulu (Norfolk Grey) company.

Currently shut up in the Eglu acclimatising are a lovely Speckled Sussex and a beautiful Scicilian Buttercup. No, I'd never heard of them either. Angus has named then Dottie and Doodle (not sure which is which) and they will be released to roam in a couple of days.

It was cria weigh day today and a few pictures were taken. Couldn't get all six in the same shot, four was the maximum.

First of all though a very close-up of Rafiki who marched up to Sue and stuck his nose on the end of the lens. He is utterly fearless and wanders up for a chat as if he has being doing it for years. 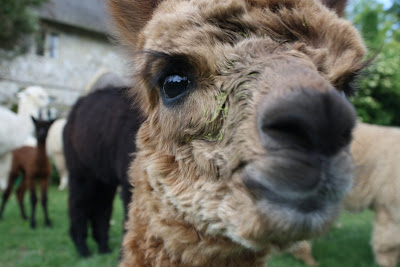 From left to right Roger, Reeya, Rosa and the lump that is Ruby May! 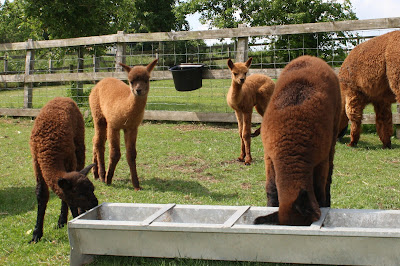 Rafiki following Rosa about, he's heavier than her and she's 5 days older. 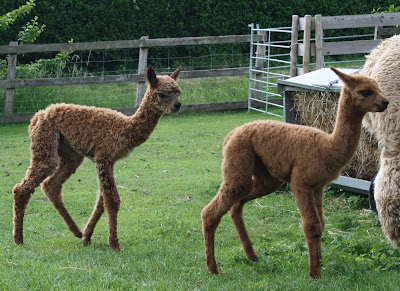 Mind you he is the biggest cria we have had weighing in at 10.6kg. A whopper indeed.
From left to right, Ruby May, Rafiki, the utterly gorgeous Runa and Reeya. 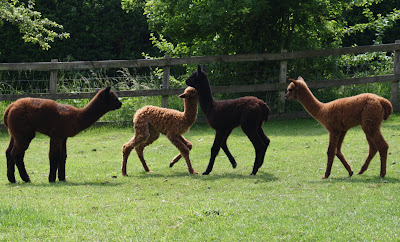 So there we have it. Saturday, midday, shearing or I swear there will be more tantrums!
And more apologising.
Posted by Patou Alpacas at 16:20

What a lovely sight Mark. Love the bottom photo...and yes all the right colour!!

The latest herd members look great. Here in sunny Colorado we are on our fourth day of rain. It was 39 degrees this morning. It's warmed up, but now we have hail. You put it so well - bloody weather!

It was about 25 degrees here in Holland. Beautiful weather for shearing. We still have to do another 6 animals. We shear them ourselves. Just bought new equipment. So now we can shear together (twice as fast, ha, ha...). Now we only have to shear the showteam. The cria look lovely.
Buy some hairdryers / foehn for saturday (ha, ha...).
See you,

Thought about you as the rain came in last night - we were all set with stand-in shearers for tomorrow, and just had a call at five to ten, saying there's been an accident, can't make tomorrow, and hope to do it later in the week - at least the weather forecast is fair...