The Royal Bath and West show. 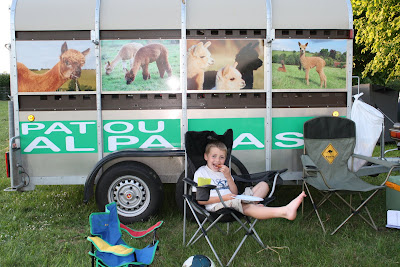 The Mighty Patou Tribe returned hot and tired last night from an absolutely fantastic three days at the Royal Bath and West Show. The picture above illustrates our demeanour whilst we were there; laid back and having fun. Something Angus does particularly well! 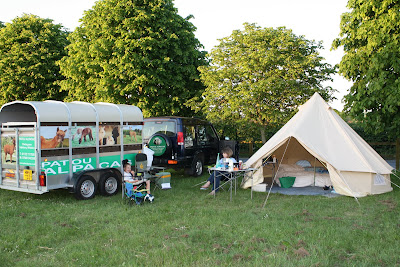 We had arrived late on Thursday afternoon and quickly established our base camp which was less than 100yards from the alpaca penning area. Marvellous, game on. We were ready for action. 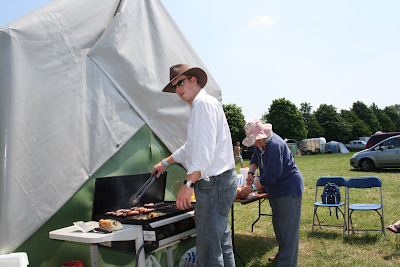 The Lord Lieutenant of Inca, His Timness kindly provided snags on the barbecue for lunch which was a really nice touch and was a nice meeting point to talk alpaca with other breeders from the SWAG area. As usual the Awesome Inca had a good show, with a bucketful of rosettes.
Friday was the day it all kicked off for us, we had Penny in the intermediate fawns (the dreaded colour chart saw her demoted from the brown class) and the Magnificent Millie in the intermediate browns. Sadly Penny, who did her best to out 'psycho' her sister Poppy in the ring, didn't place in a really high quality class of fawns. She did however, think of me in the heat by hitting me fair and square in the middle of the face with a cooling stomachful of spit. A new experience for me, facing the judge with alpaca spit dribbling off the end of my nose, not one I am particularly keen to repeat!
It was good to see friends doing well in the ring, the 'Silver Fox' himself, Trevor, had a particularly good show with his very old and grey alpacas. Here he is just about to pick up his third first place rosette of the show. Oldest show team in the competition with a combined age of just over 200 years (there was only four of them including Trevor!) 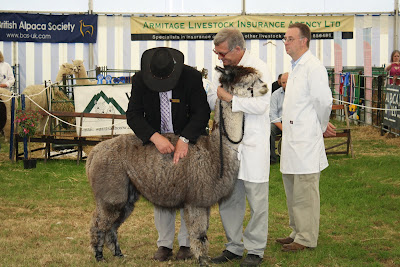 It was also good to see Dave and Joy, fellow bloggers at Apple Vale Alpacas. Dave kindly posted pictures of me and Penny on his blog yesterday and I have an action shot of Dave and Ambrosia being given the once over by Nick Harrington-Smith, our judge for the weekend. Dave resisted my 'legs amnesty' challenge and wore trousers, which is probably just as well! 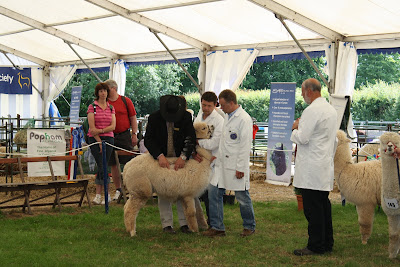 Anyway with the Penny 'spit-kick-buck-fest' out of the way we wheeled out one of our 'big guns', Patou Amelie (Millie), who completed a fantastic show season with a splendid first pace rosette in the intermediate brown class. She really is a gorgeous alpaca, a massive hit with the crowds too. Here she is pictured with some short fat bloke in shorts. 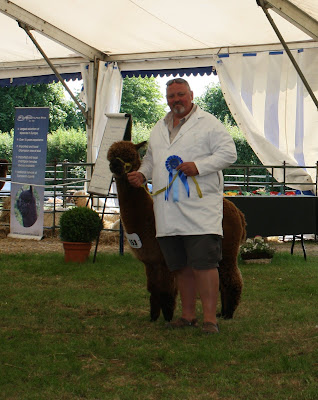 Saturday was the adult and senior classes and it was time for us to show our herdsire the Mighty Clumpmeister. I was as nervous as possible going into the ring, we had never shown him before and although we like him very much we didn't know how he would be judged.
To say that Nick Harrington-Smith is my new most favourite judge in the world may give you a clue as to what happened next.
First place rosette for Mr Columbus!
Not only that but Nick praised him verbally. He invited the audience to look at him saying he was 'beautifully balanced'. He commented on how 'very fine' his fleece was and in summing up said he was a 'very, very good male'. I was close to tears people. If someone had spoken to me I would have struggled to get the words past the huge lump that was in my throat.
When Nick was at the other end of the line Columbus and I turned to Sue and had a sneaky picture taken. Naughty, I know, but it clearly illustrates that we had our game faces on! We were mean, moody and ready for action! 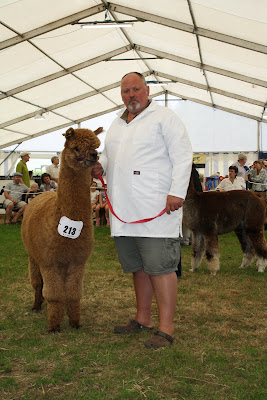 Gary and Felicia from Popham also had a good show, Gary will no doubt be posting later today of his successes.
However, the most successful show team belonged to Chas and Rachel. Classical Mileend Paris took the Supreme Alpaca title and is pictured below with Chas and our judge,Nick. They also took the 'Best of British' prize which is a really nice one to win.
Congratulations to them, nice people, cracking alpacas. 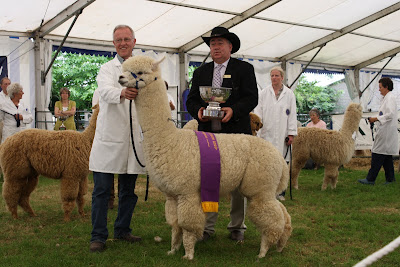 So there we have it, our show season has come to a close and we will be shearing next week.
All in all our most successful year so far and a thoroughly enjoyable one.
We will return even mightier next year and I feel we have taken another step towards total world domination.
Posted by Patou Alpacas at 10:12

Massive and well deserved congratulations. We had a great time as well!

Well done indeed! Do those Inca folk never go anywhere without easy access to bbq food? Love the shorts. I can tell you are choked up - no smile whatsoever!!!!

Congratulations on your two first place ribbons. Enjoyed evenings around the gaslight and entertainment provided by the children.

from the Silver Fox

Well done the mighty Patou! Glad to see those legs didn't detract the judges attention from the alpacas!!!!

Congrats on great results, Mark! No surprise you do well, though. Your alpacas look great :-)

Congratulations Mark. I can just ablot imagine how excited you were the boy did good!!