When we bought our foundation herd of three pregnant females we had a wether thrown in free. He was big, white, strong and a real wimp. His name was and is Jake. 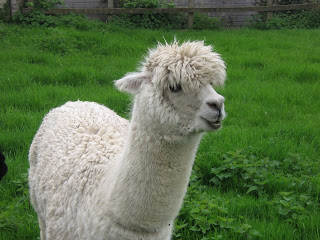 Jake has been great, although a little hard to deal with at toenail cutting time once he knows he isn't in charge he settles down and is a real character. He has always watched over the herd. He is always last in at feeding time, he hangs around scanning the horizon just to make sure it isn't some cunning trap with some awful ending.
He challenges the big strong females but never really succeeds in winning, those big girls always seem to have the last word, or spit, or screech. I think he has a go at domination and then gives up when he realises the female he has picked on will stand there and argue back all day.
Although he is a wether he can be useful in letting us know when a female has lost her pregnancy, during the summer 'mating and birthing' months he will jump on anything empty and we then know that we need a remate, very useful. He's not up to spitting off though, too much testosterone required and as I said at the beginning of this piece he is a real wimp.
Anyway yesterday he made me really, really angry.
We welcomed two new alpacas to the farm on Thursday, Valley Farm Emma and Valley Farm Sheba, two lovely young alpacas from Sue Lucas at East Knoyle.
Sue who has had alpacas for nearly fifteen years has decided that she would like to sell her small herd and asked us if we could help with Emma and Sheba. 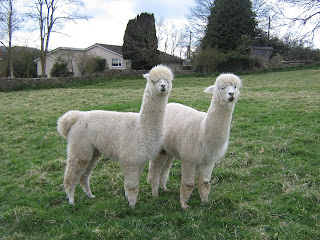 Emma and Sheba are lovely looking girls and are now on the website for sale. There was the usual swirling, prancing and sniffing that greets any new addition to the herd and then they settled in very well.
Yesterday morning however, was not so good. For some reason known only to himself Jake seemed to take a huge disliking to Sheba. He was chasing her, no not chasing he was running her down and pouncing on her, he was also biting her. Being much larger than her he literally flattened her. Poor old Sheba was doing nothing to intimidate him, she wasn't even near him. For some reason Jake didn't like her.
It made me mad when I saw him run her down and I lost a little bit of sense to be honest.
I charged him, I tried to run him down, which was ridiculous but I had lost it. I was running round a five acre field after an alpaca waving my fist at him like some crazy man. It must have looked great to any neighbours that may have been watching. A redfaced middle aged man of, shall we say portly build, charging after an alpaca who was merely gliding to keep ahead. Not only that but I was shouting some not very nice things at him, there may have been mention of an oven and mint sauce...................I really had lost it folks.
Anyway once I had calmed down they were all rounded up and the herd has been split.
The paddock that we were keeping clean as a maternity paddock now contains Jake and a few robust females who will not put up with his antics. Sheba is now very happily grazing the larger paddock with a nice group of friendly females and weanlings. Jake has had a severe talking to and is now on a final warning.
It is a complete mystery as to why he should take a disliking to Sheba, he has never behaved like this before.
Another lesson learned in the great wonderful world of alpacas.
Posted by Patou Alpacas at 18:58

Blimmin heck...you really did lose the plot! Gave me a jolly good laugh though...can you get Sue to video it next time and put it on you tube?