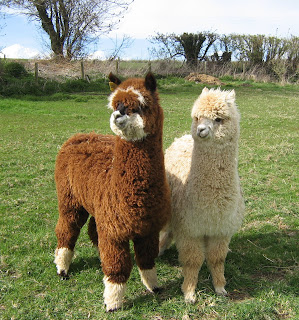 Today was a bit of a family day out.
Angus (5) has been bashing on about going to the 'army man museum' for ages.
The 'army man museum' is the Tank Museum at Bovington. His grandmother took him there last year and bought him a model tank. As usual Angus smashed it to bits within hours of getting home and he has craved a replacement ever since. Today was replacement day.
What I didn't realise was that to Angus it meant going to the 'army man museum' to buy a new tank and then come home to play with it. Entrance fees, tank purchase, refreshments and petrol meant it was inevitably going to be a very expensive tank. 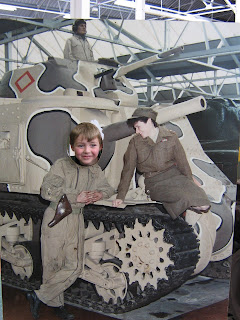 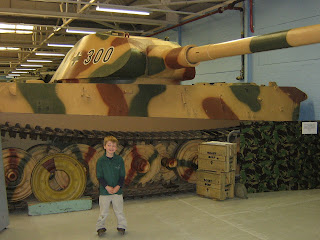 To cut a long story short, Sue and I had to speed read everything as we were whisked around the museum towards the shop. He didn't need to see anything again, he'd seen it all before after all.
Anyway, new tank bought, we could all come home.
We came home to the alpacas and peace. Actually the alpacas looked like they had been waiting for us..............well not us exactly but the contents of our bucket........... food.
After food we were privileged to watch Orchard Apollo and Mr Bo Jangles play fighting. 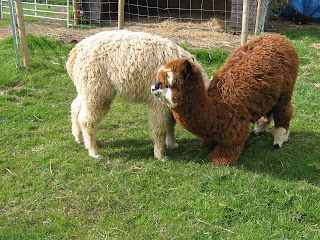 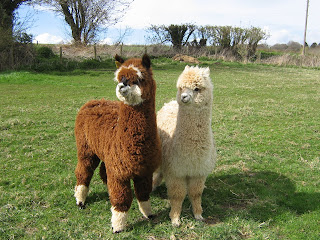 Apollo is owned by friends Charlie and Louise Maidment and he has become great friends with our little bundle of trouble Mr Bo Jangles.

They are inseperable and are never far apart. They have started to play fight on a regular basis and it is great to watch. They are fabulous together. Great friends.
They were playing for a very long time which is just as well. I had been watching for 5 minutes or so when I thought I should take some photos.
I waved at Sue who was watching through the kitchen window and gesticulated that I would like the camera. She came out and delivered the camera, I got in position and ..........................the batteries were flat. A trip back into the house for more batteries and I returned.
Thankfully those boys love each other so much that they were still going strong and I managed to take some photos. The pictures are for Charlie and Louise really, their boy is having a good time and they should know he's as happy as a happy alpaca can be!
Posted by Patou Alpacas at 20:21

Photographing a bit of boy on boy action but you went all flat hmm? ... ooh needed charging up did we sir..ooh...get the right exposure did we sir ooh...improvise with a tripod did we sir ooh...phnarr phnarr...further seedy inuendo not in keeping with your professional image etc etc