A daily posting, that's what I said initially.

I have found that it is harder to do than it sounds.

I am after all only a part time Alpaca breeder, and with a herd of only 22 beautiful fluffy creatures, (alright there are a couple who have been belted over the head with the ugly stick) but inwardly..........actually no... that's not right either. Moving on.

With only 22 alpacas and 5 acres of land there is only so much to do. Writing about watching alpacas is fine but to hold someone's attention takes some skill. To keep people reading you need to offer more, humour, excitement, drama.

So today I knew I was on to a winner. I spent the day with good friends, the team at Inca, helping out with general husbandry. A cracking herd of black (mainly) alpacas numbering in excess of a hundred need takes some looking after and it is always a pleasure to help out Tim if and when I can.
Met some very nice people, worked hard (for alpaca breeders) and had a nice lunch. It was hot when the sun shone and not so when we were being hailed upon, but a good day was had by this Patou warrior. Afterwards Timbo was good enough to bring over two males for some matings and an 'optic nerve' was cast over the herd.
A big thank you to Tim and Tracey, I think they even read this rubbish and for that I am very grateful.


Later as I now write this drivel I sit quietly contemplating our herds progress so far. I attempt to cast ahead to see how we will do over the next few years, (cast ahead? sorry I have just finished a Wilbur Smith novel) we are slowly building a herd of quality alpacas. We are doing things the right way, this I firmly believe and I think we will have a very nice herd of alpacas when we make the trip south to the Pyrenees.

Yikes getting far too serious there nearly had a nosebleed. We had snow the day before yesterday and 1.5 seconds after the following photograph was taken I was wearing a snowball facepack and boy did that sting! Got a hell of a throwing arm that boy and he always brings things firmly into perspective! 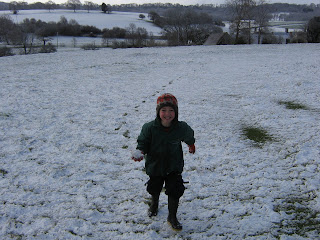 Angus Steele looks very menacing...that cheeky grin is fooling no-one! Sorry to hear you got smacked in the face with a stinging snowball...no I'm not. ;-)