Another great day today and I spent most of it outside which was splendid. The alpacas seemed to have spent most of the day lying flat out. Every time I turned round it appeared that half the herd had been wiped out by some far off and unseen sniper.


More progress was made in the jungle, I mean garden. I mowed the grass for starters including the large area that was left at the end of last summer, rather lazily labelled 'The wildlife garden'. That put the mower through it's paces but because I had bought the biggest most powerful petrol mower I could lay my hands on a couple of years ago it was easy peasy. I'll mow it all again in a couple of days and that will be it, along with most other people, mowing every week until next winter. That could be a long time or a short time who knows?


Being surrounded by animals we are undoubtedly surrounded by their waste. We live on a sheep farm and so every field in every direction has some sort of poop making machine in it. We also have two chocolate labradors who love nothing more than to be amongst other species poop. The roll in it, they sniff it and above all they eat every bit they come across. They are quite simply the most disgustingly loveable creatures I have ever met. If I walk them round the alpaca fields they eat as much as they can. It is really a bit of a frenzy. No amount of shouting stops them. If we walk them round the sheep fields it's even worse. Not only do they eat every speck of poo they see but they have discovered a new delicacy this year.


We have had over a thousand lambs born so far this year, yes there's more to come. All of them have a ring put on their tail which causes it to die and drop off. The same goes for the male lambs. Although they get the added bonus of having a ring put over their scrotum and that in turn falls off after a couple of weeks. The dogs have recently discovered this culinary delight and hoover them up. Quite how we allow them back into the house every day escapes me. Angus rolls around with them daily; they lick him and nibble his ears, he loves it. What can you do? Thats what living in the countryside is all about I suppose. He's hardly ever ill, has been sick once in the last 4 years and that was chicken pox which is compulsory I understand. 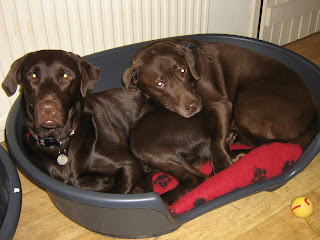 The real downside of all this extra curriculum snacking is that the dogs, I will now name and shame them, Bryn (11 year old puppy) and Josh (1 year old puppy) have stepped up their own production line. They are taken out for 20-30 minutes twice a day religiously come rain or shine and normally that is enough. Now they have to wake us up in the middle of the night to slip out for yet another dump. Sorry folks but dump is very much the correct word in this instance.


As a result sleep is interrupted to the extent that I have threatened them with banishment to the field shelter. As I recall when I issued this ultimatum this morning Bryn yawned and Josh farted........noisily.............again.


Has anyone got any ideas about how to stop this feasting?
Posted by Patou Alpacas at 17:46

Put some lead in their ears that will stop it. I was going to go further into detail but I feel a bit queasy...

if your dogs must keep eating crap check out this link..I think it might help you

I have a great idea, why not get out in the paddock before the dogs get there and eat it yourself.... Les said have you heard of feeding them Pedigree Chum ??, apparently it's not cheaper than sheep shit, but the dogs flatulence smells better.